The following is an analysis of all patients who presented for treatment with a primary diagnosis of Bulimia Nervosa between the start of my private practice in 2009 and spring 2017.  Given that this is an analysis of end of treatment outcomes, patients who were currently in treatment with me as of spring 2017 or later were not included in this sample.  Patients and families whom I saw only for evaluations or consultations rather than treatment were not included in this sample.

Description of the Sample

This sample includes 13 individuals, all female, who were between the ages of 14 -27 at the time of their initial evaluation (mean age = 19).   Duration of eating disorder prior to starting treatment with me ranged from 1 month to 11 years, with a mean duration of 3.5 years.  Nearly half of the sample (46%) had a prior history of anorexia nervosa prior to beginning treatment for bulimia with me.   More than ¾ of the sample (77%) had a secondary diagnosis, with the most common being Major Depressive Disorder, followed by ADHD and Anxiety Disorder Not Elsewhere Classified.

Description of the Treatment

Number of sessions attended ranged from 2 to 35, with a mean of 15 sessions.  Duration of treatment ranged from 1 month to 28 months, with a mean duration of 8.8 months.  Over half of the sample (54%) took psychotropic medication during their treatment.

Sixty percent of patients under the age of 18 received Family-Based Treatment for Bulimia Nervosa (FBT-BN).  The remaining 40% of patients under 18 received Cognitive-Behavioral Therapy (CBT) with a moderate to high level of family involvement, meaning that a parent or guardian participated in many or most of the sessions.   Patients over age 18 received CBT, with an integration of Dialectical Behavior Therapy (DBT) skills for mindfulness, distress tolerance, emotion regulation, and interpersonal effectiveness.

Approximately 62% of the sample paid full rate for services.  The remaining 38% received a reduced rate based on financial need.

Status at End of Treatment with Me

The rate of attrition (treatment dropout) in this sample was very high.   Over half of patients in this sample (54%) discontinued treatment prematurely after making significant progress, but prior to achieving full remission.  Fifteen percent of patients were referred to other treatment providers or types of treatment that could better meet their needs, after making little or no progress in treatment with me. Eight percent of patients moved to other geographic locations and were thus referred to providers near their new homes.

For complete definitions of terms such as “full remission” and “significant progress,” see this blog post from 2013. 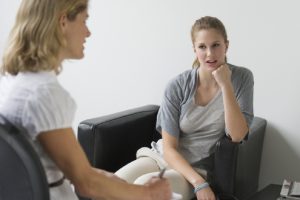